…In Connection To The Robberies, Burglaries And Cult Violence In Some Parts Of The State.

The suspects were arrested after residents of  Owode, Ilepa, Ifo, Arigbajo, Itori, Dalemo, Ijoko Joju, Sango, Ota in Ifo, Agbado-Ijaiye, among other communities in Ifo and Ado-Odo/Ota Local  Government Areas of Ogun state, alerted the police of the attacks.

Ogun state Commissioner of Police, Kenneth Ebrimson linked the attacks to seven rival cult groups. He revealed that the police arrested some of the suspects at their hideouts and also recovered some weapons.

“The genesis of this was from some criminal gangs that engaged in supremacy battle in Ifo and spread to Ado-Odo/Ota Local Lovernment Area of the state.

“It started on April 4, and the command tactical operation arrested some hoodlums and recovered ammunition.”

Ogun state governor Dapo Abiodun who spoke to newsmen, vowed to deal ruthlessly with anyone found guilty of orchestrating the unrest in the state.

“It has become expedient that we do not spare the rod and spoil the child. Anybody, no matter whose child he or she is, if found guilty of robbery, would be visited with the full weight of the law, including capital punishment.

“I will not hesitate to confirm sentences, even of capital punishment, if that will deter these social misfits. Ogun has zero tolerance for criminals and we will deal with the with venomous measures. Enough is enough.” 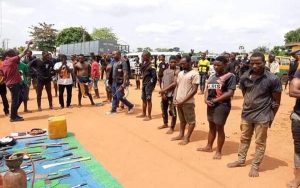 By: HighCelebritySquard   Governor Babajide Sanwo-Olu has approved special e-portals that will allow Lagos State tertiary institutions commence online lectures as part of measures to reduce the impact of Coronavirus on education. The seven schools that will benefit from the initiative are: Lagos State University (LASU), Lagos State Polytechnic, Adeniran Ogunsanya College of Education, Michael […]

By: HighCelebritySquard   Governor Muhammad Bello Matawalle of Zamfara State has vowed to demolish any house where bandits’ informants or weapons suppliers are living in the state. The Governor made this known while responding to the Sokoto state governor, Hon. Aminu Waziri Tambuwal along with his Council members who came to commiserate with the government […]

By: HighCelebritySquard   Police detectives from Abuja, on Thursday, arrested cross-dresser, Idris Okuneye, popularly known as Bobrisky, over an alleged N30m fraud. It was gathered that Bobrisky was arrested at the Lekki area of Lagos State. According to PUNCH News, We learnt that a yet-to-be-identified businesswoman petitioned the police and alleged that Bobrisky fraudulently collected the […]