The All Progressives Congress has dissolved its National Working Committee.

The decision was reached at the National Executive Council meeting held on Thursday.

Bashir Ahmad, an aide to the President, Major General Muhammadu Buhari (retd.), tweeted, “Following the recommendation of President Muhammadu Buhari, the National Working Committee (NWC) of the All Progressives Congress (APC) has been dissolved.”

The problem in the APC NWC came to a head on Tuesday last week when the Court of Appeal sitting in Abuja upheld the suspension of the party’s National Chairman, Adams Oshiomhole, by the High Court of the Federal Capital Territory.

At an emergency meeting on the evening of the same day, 17 members of the NWC loyal to Oshiomhole, appointed a former governor of Oyo State, Senator Abiola Ajimobi, as acting chairman.

Giadom, in a counter move, together with two other NWC members, addressed a press conference on June 17, when he declared himself as the acting chairman. He backed his action with the judgment of the FCT high court, which in March gave him the go-ahead to be the acting national chairman.

Despite his suspension by two Port Harcourt courts and his replacement as the deputy national secretary, Giadom on Tuesday issued a notice of the APC NEC meeting, which would hold today (Thursday).

But the Ajimobi-led NWC on Tuesday said having been suspended from the NWC, Giadom was not qualified to convene the NEC meeting. 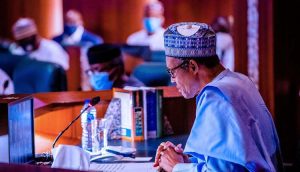 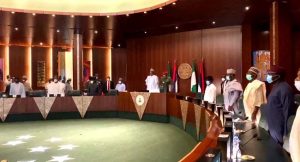 Lagos State: Revocation Of Approval Of Layout In Respect Of Properties Encroaching On The Regional Road Alignment, Lekki, North Of Elegushi Layout Lpao 992.

By: HighCelebritySquard   It has been established by the State Government that some estates, buildings/ structures have encroached on the Right of Way (RoW) of the Regional Road in Lekki axis. The Road was first conceived by Lagos State Government in the Lagos Metropolitan Master Plan (1980-2000) and was retained in the approved Lekki Comprehensive […]

By: HighCelebritySquard   As the very fundamentals of American democracy shook, after a violent attack at the US Capitol, President Donald Trump finally conceded and pledged an orderly transfer of power to President-elect Joe Biden. After months of claiming that the elections were stolen from him, Trump said early Thursday that he would respect Congress’ […]

Exclusive Photos Of Primate Ayodele As A Toddler

By: HighCelebritySquard   Not much is known about popular prophet, Primate Elijah Ayodele’s personal life, even though many have been digging to know about his upbringing. It seems some of his background history is becoming unraveled with an exclusive picture of his as a very young boy, probably in his father’s house. These pictures was […]