The Celestial Church of Christ Worldwide through its Pastor, Reverend Emmanuel Mobiyina Oshoffa, has made a donation of N25,000,000 (Twenty Five Million Naira) to Nigeria Centre for Disease Control (NCDC), as well as Lagos and Ogun State governments to support Nigeria’s fight against the deadly COVID-19 pandemic,

While presenting the donation at the Governor’s Office, Oke-Mosan, Abeokuta, Ogun State, spokesman for the church’s delegation Superior Evangelist Bola Akinterinwa lauded the efforts of the government at combating the deadly scourge especially as regards the provision of medical facilities and palliatives for the citizens of Ogun State in particular and Nigeria in general. He assured the Government of the continued support of the Pastor and the entire congregation of the Celestial Church of Christ Worldwide and seized the opportunity to inform the Governor of Ogun State of the church’s plan to commence the construction of a world-class university in the Celestial City, Imeko, Ogun State before the year runs out. He prayed for government’s intervention for the re-construction and possible dualisation of the Abeokuta-Imeko Road.

Responding, the Deputy Governor of Ogun State, Mrs Noimot Salako Oyedele who received the church delegation on behalf of the Governor expressed appreciation for the donation and assured that the donation would be used to tackle the deadly virus. She further assured that she would convey the prayers of the church concerning the proposed Celestial International University, Imeko, Ogun State and the re-construction of the Abeokuta-Imeko Road to the Governor of Ogun State.

Prayers for the Government and people of Ogun State were offered by the leader of the delegation, Most Superior Evangelist J.D. Nunayon. Also in the church delegation were Superior Evangelist M.O. Shodunke, SVMSE Kayode Ajala and Evangelist Gbenga Daniel Adebayo. The delegation thereafter paid a condolence visit to General Ekundayo Opaleye, a former Military Administrator of Ondo State and member of the Pastor-In-Council at his G.R.A Abeokuta residence to commiserate with him on the recent demise of his son. 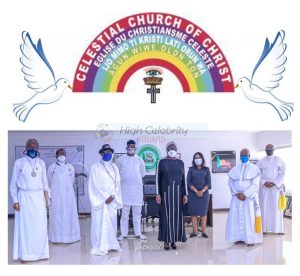 By: HighCelebritySquard   The federal government has finally approved the request of the Senator representing Anambra South Senatorial District, Ifeanyi Ubah to reconstruct some federal roads within his senatorial district. The approval was contained in a letter the Federal Controller of Works in Anambra, Mr. Adeyemo Ajani addressed to Toshel Construction Company (TCC), the construction […]

By: HighCelebritySquard   Reports have emerged that the coronavirus pandemic may force the Confederation of African Football to shift the 2021 Africa Cup of Nations in Cameroon to 2022. The next edition of the AFCON tournament was scheduled to take place between January 9 and February 6, 2021, but with four rounds of fixtures postponed, […]

By: HighCelebritySquard   For some weeks now, one misguided and possessed woman named Maureen Badejo who is obviously looking for followers on social media for financial gains has been speaking about the Mountain of Fire and Miracles Ministries UK, so much that she went ahead to attack the person of Dr D.K Olukoya, the wife, […]