The Presidential Task Force on COVID-19  on Thursday advised Nigerians to obey its guidelines on coronavirus to avoid a resurgence of the virus during the rainy season.

The PTF Chairman and Secretary to the Government of the Federation, Mr  Boss Mustapha, who gave the warning during the task force press briefing in Abuja, said there could be a resurgence of COVID-19 during the rainy season unless Nigerian adhered to the PTF guidelines.

He also listed the group’s achievements since its inauguration by the President, Major General Muhammadu Buhari (retd.),  three months ago.

He listed steps taken by the Federal Government through the PTF to check the spread of COVID-19 since the task force inauguration.

According to him, the measures include lockdown of Lagos and Ogun states as well as the Federal Capital Territory; ban on flights,  ban on interstate travels and domestic flights, closure of schools and religious centres and imposition of nationwide curfew.

Mustapha stated that the Federal Government had increased COVID-19 laboratories from two to 38, trained 13,000 health workers and developed policy and protocols for testing returning Nigerians.

The SGF reminded Nigerians that COVID-19 had reached the level of community engagement and risk communication, adding that they should obey all the guidelines and non-pharmaceutical measures.

He stated, “​Always remember, that the virus is real, potent and dangerous. Our relaxed lockdown should never be interpreted to mean otherwise. This point is further underscored by reported resurgence of a second wave in countries like China and the USA and this should put all of us on the alert, knowing that this virus can only be eliminated if we agree to play our part.

“This call becomes more pertinent as we go fully into the rainy season that ordinarily brings with it cold, catarrh and other COVID-19 mimicking illnesses. Our call to take personal responsibility cannot be more strident than now.”

On his part, the Minister of Health, Dr Osagie Ehanire, said the majority of 469 people that had died of COVID-19 as of Wednesday were above 50 years or had pre-existing ailments like diabetes, cancer, hypertension, kidney disease and HIV.

He, therefore, urged people in those categories to stay at home or wear face masks whenever they are going out.

The minister also said going to crowded places such as markets and worship centres could expose one to the virus.

Ehanire stated, “I also stress that being in a closed room increases the risk of exposure to infection in proportion to the number of people and the length of time spent with them, because the likelihood of presence of a positive person increases with the number and infection with time of exposure.

“All persons in the vulnerable group who test positive should go to a treatment centre immediately, in their own best interest. A vulnerable person is not among those who should risk staying at home, because complications can arise easily and suddenly or at an odd hour of the day or night when there will be no immediate help available.”

He added that any person who tested positive and opted to stay home or elsewhere  should move to a treatment centre at the first sign of fever or shortness of breath.

“A delay can be fatal because the disease progression can be unpredictable and faster than imagined,”  he warned.

He said coronavirus was infecting more Nigerians,  “including prominent members of the society. Friends and family have an increasingly important role to play in helping to guide compliance with this advisory.”

Also, the minister said the Federal Government would review the two variants of the reports about COVID – 19 fatalities in Kano.

He said that although the two reports were not totally far from each other, a certain percentage of the unexplained fatalities were due to COVID – 19.

The Kano State Governor, Abdullahi Ganduje, had on Wednesday faulted the Federal Government, which a few weeks ago said the majority of strange deaths in Kano were caused by COVID-19.

“They are not totally far from each other because they do admit that a certain percentage of the unexplained fatalities were due to COVID – 19. There is a slight variation in the percentage that is attributed by either side. So, we are going to look at it but other factors that were brought in will be looked at and examined.”

He also faulted the claim by the National Association of Resident Doctors that there was inadequate personal protective equipment in hospitals, describing it as incorrect.

Ehanire maintained that he had made it a point of duty to ensure that PPE  was widely distributed to all public hospitals nationwide.

According to him, any hospital found to have a shortage of PPE was immediately attended to in order to remedy the situation.

Also in his short response, the Minister of State for Education, Emeka Nwajiuba, said the Federal Government did not regulate payment of fees by private universities.

He was responding to a question that some academic institutions, especially private universities in Nigeria were charging high fees.

Aliyu explained that the lockdown was relaxed to sustain the livelihood of Nigerians particularly those who depended on daily incomes.

He stated, “There are concerns about the issue of compliance. As you are aware, we are here to push for the containment of COVID-19 in the country from data-driven medical advisers. The fact that we are receiving many reports on the flouting of the guidelines by individuals and organisations is simply unacceptable.”

The PTF coordinator also made a veiled reference to a concert that featured controversial Nigerian musical artiste, Azeez Fashola, aka Naira Marley, who flew from Lagos to Abuja to perform at the event, held in the Jabi Lake Mall, in violation of the COVID-19 guidelines.

Aliyu said, “There are also concerns about physical distancing and the issue of mass gatherings. We particularly note the issue of social gathering and organisation of concerts, against the lockdown protocols by the Federal Government. We are working with the security agencies to put in place enforcement when it comes to organisations that flout these guidelines. We will not sit back and allow public safety to be endangered by a few.”

“While we are very much aware of the challenges that people continue to have because of the guidelines that we have issued, these guidelines are there for a specific reason – they are there to protect us and public safety. We know that some agencies have been fined or even closed due to non-compliance. There have also been various levels of enforcement, using the police, mobile court and in some cases, charges being brought against the parties.”

Nigeria recorded 745 cases of COVID-19 on Thursday bringing the total number of cases in the country to 18,480.

The figure was the highest recorded by Nigeria in a single day since the outbreak of the virus in the country.

The Nigeria Centre for Disease Control on its website said  6,307 COVID-19 patients had been discharged, while 475 deaths had been recorded. 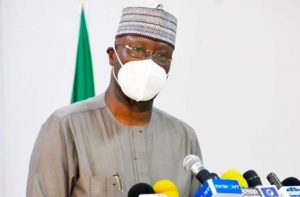 By: HighCelebritySquard   Consumers have commended Mouka for its delivery of quality products that improve wellness and other worthy initiatives in line with its mantra of adding comfort to life. They also applauded the frontline company for its leading role in the manufacturing of mattresses and other bedding products which cater to the needs of […]

By: HighCelebritySquard   As part of its promise to continuously provide financial and business skills to female entrepreneurs, Access Bank Plc has unveiled the second edition of its Womenpreneur Pitch-a-ton programme. The Womenpreneur Pitch-a-ton Africa 2020 Campaign is designed to provide female owned businesses across Africa an opportunity to access to finance and world-class business […]

By: HighCelebritySquard   The Arole Oduduwa & Ooni of Ife, Ooni Adeyeye Enitan Ogunwusi Ojaja II, has congratulated members of the Christian family IN globally on the 2020 Christmas celebrations saying the history of Jesus Christ is full of testimonies inspiring enough to find him worthy of emulations In a Christmas/New Year message by his […]