An organization, Cornel Media consult(CMC), has condemned the wanton attack on the Nigerian police that led to the deaths of several policemen and destruction of several police properties by hoodlums at the height of the Endsars protest.

It could be recalled that not less than twenty men of the security agency were brutally murdered in some states in Nigeria, while properties worth billions of naira were reportedly destroyed by irate youths during the Endsars protest.

Speaking through its leader, Amb. Cornell Udofia, the group who paid a courtesy visit to the Assistant Inspector General of police, Zone 2, Iliyasu Ahmed, said the incidence calls for a sober reflection and should lead to peace at the end.

‘We join our voice in condemning the attack on the police in the recent riotous EndSars protest that led to the loss of lives of policemen and massive destruction of several properties This odious circumstance, which calls for sober reflection, where a good number of the citizens at the receiving end, and the security operatives became weary of circumstance calling for dialogue leading to the highway of peace as our end result’

Amb .Udofia commedended the AIG, Iliyasu for curtailing the situation in Lagos and Ogun state which are both under his watch.

‘Our relationship with Zone 2 has existed for over a long time, and what brought us really closer to the zone more is AIG Iliyasu who is our friend, so, we have come to support him in this trying time’

On his part, AIG Iliyasu expressed his satisfaction and joy over the gesture of the group, promising the continued commitment of the police, and calling on the support of the media in bringing about sanity in the country.

He said; ‘I feel so happy and highly overwhelmed that the CMC and other media professionals are here to commiserate with me, and to also appreciate my efforts. The act of human kindness you have shown today is ever unprecedented. This kind of benevolence and kindness you have shown, will spur the police to do more’

‘ I have to make it clear to you that the IGP has been here, he went round and has spoken to all of us, and definitely we have made our commitment to continue to be resilient and professional, and continue to commit ourselves to the service of this nation’

‘The media as you represent is a critical stakeholder in our drive towards technical oriented policy, technically driven policy, as well as democratic policy. I make it clear to you that we will continue to synergize with the media in policing our state. This is the time for people to come together and safeguard the security and peace of this nation, to protect the critical assets of this country, so that we are going to leave behind to our children something that will be a history for them, that will be of great importance to them. I continue to urge the media to continue to churn out positive News that will safeguard the peace and security of this country’

Those who accompanied Amb.cornell udofia to the visit were;

Those who supported the AIG Ahmed Iliyasu to received the visitors were:

Supritendent of police in charge of zonal Monitoring unit Zone 2 command, SP uba Adams who was celebrated as the crime Burster of the year by the group.

Deputy supritendent of police who has served the AIG Ahmed Iliyasu as P.A since 2016 @ DSP Shuaibu Ango was also given Excellece award in service Delivery to the command. 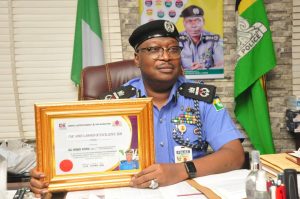 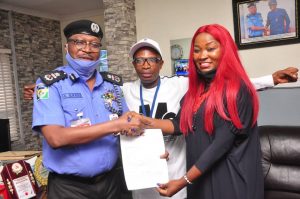 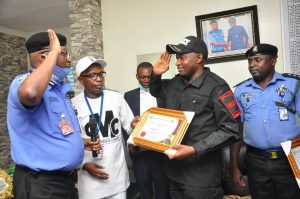 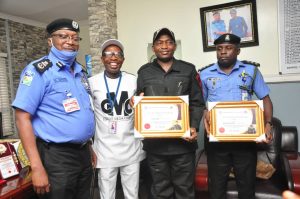 By: HighCelebritySquard   Lagos State Governor Babajide Sanwo-Olu has approved the appointment of Mr. Ibrahim Odumboni as the Managing Director/Chief Executive Officer of the Lagos Waste Management Authority. This was contained in a statement issued on Monday by the state government and titled, ‘Sanwo-Olu appoints Ibrahim Adejuwon Odumboni as new MD/CEO of LAWMA’. In the […]

By: HighCelebritySquard   A leading contestant for the October 10, 2020 governorship election in Ondo State, Eyitayo Jegede (SAN), on Tuesday stormed the National Secretariat of the Peoples Democratic Party (PDP) in Abuja, to obtain his nomination form ahead of July 22 primary election of the party. Jegede, a former  attorney-general and commissioner for justice […]

Posted on May 6, 2021 Author highcelebrity

By: HighCelebritySquard   Pan African Financial Institution, United Bank for Africa (UBA) Plc has announced that 10 of its  loyal customers will get a chance to win N1,000,000 each, in the ongoing UBA Savings Promo which is scheduled to hold on to May 7, 2021 at the bank’s corporate head office, in Lagos.   This unique promo intends to […]