It was easy deciding to write this. At least with the current situation of the country brought by COVID-19 and the need for everyone, but those carrying out essential services to remain home, one’s mind is now open to a crowd of thoughts. However, decisions are different from actual implementations. How can one effectively write about Rt. Hon. Femi Gbajabiamila, the Speaker of the House of Representatives without any difficulty? What part of his being can one write about with any form of mastery? Will this piece not even be doing injustice to the man, who my colleagues will agree, has that needed emotional intelligence required for leadership and grasp of every situation?

For a time now, the National Assembly has not sat (a sitting, however, took place recently); the activities of the lawmakers have been hampered by the ravaging Coronavirus or COVID-19 pandemic. But Gbajabiamila? He remains in the news either looking for ways to ease the effects of the lockdown on the people of the country or fighting for the restoration of dignity for Nigerians in the diaspora.

Just recently, Gbajabiamila had a reason to summon officials of the Chinese government over the way some Nigerians in China were treated as revealed in a video that trended. The video showed Nigerians being sent out of their houses and passports seized. A furious Gbajabiamila declared that his country would not take such ill-treatments lightly. (Today, I met with the Chinese Ambassador to Nigeria on the disturbing allegation of ill-treatment of Nigerian citizens in China. I showed him the video clip that had made the rounds. He promised to look into it and get back to my office on Tuesday. The diplomatic relationships between our two countries are for the mutual benefits of our citizens, then there must be respect for our citizens and we should not compromise it…we will not allow Nigerians to be maltreated in other countries.” the Speaker said after the meeting.

Then, you may want to ask what is true leadership if this is not. Upon inauguration as Speaker, Gbajabiamila had stressed the need to build a worthy Nigeria. No wonder the focus of the current National Assembly is “Nation Building, Joint Task”. He promised to shake tables where necessary and in the interest of Nigeria and it’s citizens. He has not shied away from this ever since.

It can only take a man with an understanding of the people he represents to know when things are not rose. In the heat of the lockdown imposed by states and the federal government in response to the COVID-19, Gbajabiamila House of Representatives initiated a bill that would allow Nigerians to enjoy free electricity supply for a particular period.

The lockdown, it was anticipated and even noticed, was already grounding individual economy and the least the government could do at that stage was to put some forms of alleviations in place, one of which would have been to take off the payment of electricity bills from the people throughout the period of the stay-at-home.

“It is one thing that will touch every household. As I said earlier, when we engaged, I discussed with the electricity Distribution Companies (DisCos) to propose what it would require- if the government can give them – for us to allow for two months free electricity for Nigerians. The proposed Bill, which will be the second Stimulus Bill by the Green Chamber, is to be considered immediately the House reconvenes from its ongoing break, declared due to the pandemic,” Gbajabiamila had said about the development.

To show his seriousness about this proposed general palliative for the people , the Speaker and a team recently met with President Muhammadu Buhari. The issue was tabled in the course of discussions and Gbajabiamila, it was, told us all how the topic came up and how Buhari paid rapt attention while it was being discussed. “When you ask people to remain at home, you must make that home a little bit comfortable for them,” Gbajabiamila said. Is this true leadership? Let your mind answer with all sincerity.

In the heat of the scramble for the leadership positions of the ninth National Assembly, I remember a piece I wrote on the need to make Gbajabiamila the Speaker of the House. In that piece, I noted that the federal legislature needed someone, not just old in the number of years he had being a legislator, but one with the experience of how to move his colleagues and the people to achieve a generally agreed and desired goal for the benefit of the nation. I advocated for someone who would, like Myles Monroe would define a leader, say: “Follow me, I am right behind you.”

If there is one good thing about the House of Representatives where I currently stand for the people of Apapa Federal Constituency, it is the fact that apart from being at the service of those who sent me there, I, like every other member of the chamber, am being led by a person who truly understands leadership. Thank you dear Speaker Femi Gbajabiamila. 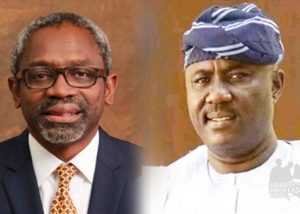 By: HighCelebritySquard   First Bank of Nigeria Plc is a financial institution that has being in existence for the past 125 years and the bank is still dominating the financial sector of Nigeria till date. According to the Chairman of First Bank Plc, Oba Otudeko, the bank is out to create the notion that Nigeria […]

By: HighCelebritySquard   The Federal Government has introduced a meter rollout scheme under the National Mass Metering Program (NMMP) as part of effort to further bridge the country’s metering gap and also cushion the effect of the Service Reflective Tariff on electricity consumers in Nigeria. Ibadan Electricity Distribution Company Plc (IBEDC) will commence the rollout […]