First Bank of Nigeria Plc is a financial institution that has being in existence for the past 125 years and the bank is still dominating the financial sector of Nigeria till date. According to the Chairman of First Bank Plc, Oba Otudeko, the bank is out to create the notion that Nigeria has produced one of the best and biggest banks in the African continent. First Bank has supported a lot of companies to achieve their aims and most especially the pro-African companies. Historically, in the late 19th century, the formation of First Bank emanated from the story of British Shipping Companies that dominated the Atlantic and one of them is Elder Dempster which specialized in African trade and dominated the West African terrain from Sierra Leone to Fernando Po. The company later hired a young manager called Alfred Louis Jones who already owned a smaller but successful shipping company and he demanded a favorable share to come on board. The partners agreed and in time, with further share growth, he took over the control of the company. Alfred Louis Jones and Elder Dempster decided to go into banking in the 1890s and coming together, they formed what will become the Bank of British West Africa in 1894. The bank later expanded aggressively opening up branches in Calabar, Zaria, Accra, Sierra Leone, Kano and many more. In 1914 when the Kano branch was opened, an illustrious merchant showed up with three camels loaded with three bags of silver which were all deposited that day to show the trust and positive impact of the bank. The bank has begun to support Nigerians even during the colonial era when Nigerians were agitating for better living standards. The bank was later renamed First Bank and ever since the rebranding, First Bank has always being in the fore front of supporting Nigerians in all ramifications of life, a project the bank has embarked upon since its foundation. According to the CEO, Dr. Adesola Adeduntan, profitability is important but economic growth is also very important because of the bank’s history which is woven into the economy and the society. First Bank has always being supporting the Nigerian government in many projects which include roads, bridges, dams, housing and many others, the bank has always being there for the people, projecting a brighter future and better standards of living. The bank has spent over N200 billion on agriculture First Bank was there at the privatization of the power sector in the year 2014 and also financed the rail project that moved people from the country to another. The Niger bridge project is one of the major achievements of First Bank Plc and this include other big projects. Today, First Bank is a reference point for banking globally and the bank has recorded tremendous growth and inspiring financial stability over the years. Definitely, this is 125 years of appreciative sterling banking system and module which has propelled the Nigerian banking industry to a great height. First Bank has the highest customer base of over 16 million customers with over 20,000 locations in all 774 local government areas in Nigeria. 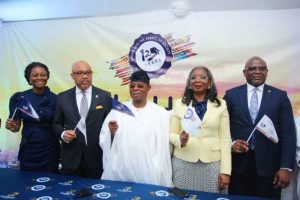 Relief In Eti Osa, As Sanwo-Olu Flags Off Construction Of Regional Road

By: HighCelebritySquard   …Gov: ‘Project Is Manifestation Of Our Promise’ …Govt Sanctions Officials, Developers Who Compromised Road Alignments The journey to the second year of the Babajide Sanwo-Olu administration has taken off on a note of infrastructural drive. On Saturday, the Governor flagged off the construction of the long-awaited Regional Road in Lekki region – […]

By: HighCelebritySquard   Mouka, Nigeria’s leading brand of mattresses and bedding products, felicitates Christians in this period of Easter, which signifies the death and resurrection of Jesus Christ. It also advocates preventive measures on the coronavirus (COVID-19) pandemic for a more robust celebration. The social responsible company which has the wellbeing of Nigerians at the […]

Premium Service On Offer As Marriott Hotel Opens In Lagos