Baby Face, saw off Jubril “Terrible” Olalekan in the second round of their eight-round national welterweight challenge contest to emerge the choice of journalists who covered the event.

In the bantamweight division, Habeeb “Ige” Oladeji won the national bantamweight title, defeating Tunde “Turning Star” Olojede by a split decision in an explosive 10-round fight.

The lightweight rematch between Rilwan “Real One” Oladosu and Prince “Lion” Nwoye ended in victory for Oladosu, the WABU champion. Oladosu, who dominated the bout all through, won by unanimous decision.

The much anticipated ring return of Olaide “Fijaborn” Fijabi saw the former African Boxing Union (ABU) light welterweight champion given a fairly tough time Dennis “The Range” Mbat. Fijabi, however, showed he still carries plenty of menace when he stopped the courageous Mbat in the fourth round.

A knockout victory was also recorded in the light heavyweight division where the lesser experienced Segun “Success” Olanrewaju stopped knockout exponent, Cosmos “Awosika” David, in the second round.

In other bouts, Sikiru “Omo Iya Eleja” Shogbesan stopped Kazeem “Delight” Oliwo, via a technical knockout in the super featherweight division, while Alaba Elybow” Omotola enhanced his reputation by seeing off Lateef “Akin Jnr” Akinola in the same fashion.

Saturday’s event was the first edition of GOtv Boxing Night without fans. It was stated behind closed doors because of Covid-19 protocols, but was broadcast live to GOtv subscribers on SuperSport Select 2 (channel 34). 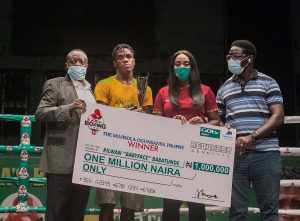 FIFA Relaxes Rules On Release Of Players For Internationals

By: HighCelebritySquard   FIFA on Monday relaxed the rules on the release of players for the upcoming international window “in light of the recent evolution of the coronavirus pandemic”. Clubs are usually obliged to release players to national teams during those parts of the calendar reserved for international games, however quarantine rules in many countries […]

GOtv Nigeria: For The Love Of Local Entertainment

By: HighCelebritySquard   In two days, a new cooking and lifestyle show will debut on GOtv, the digital terrestrial television platform from MultiChoice Nigeria. Titled ‘Jollof With Me’, the show will feature media personality Nancy Isime hosting friends over a meal and some fun, light-hearted discussions. Viewers will learn new things about the guest through […]

By: HighCelebritySquard   Frank Mba, the spokesperson of the Nigeria Police Force has given reasons why many rapists in Nigeria go unpunished. In a chat on TVC on Friday morning, Frank stated that the number one reason why rape cases are never successfully prosecuted is because they are reported late. He also disclosed that alteration of the […]

Governor Matawalle Is Consistent On Security Concerns In The State

Which is the best camera for Photographer?