Zamfara state Governor, Matawalle has rolled out the drum to celebrate the victory of Godwin Obaseki who he warmly refers to, as ‘victorious Obaseki!’

Reacting to the victory of Godwin Obaseki in the weekend held gubernatorial election in Edo state, Governor Matawalle of Zamfara state, said that the celebrated performance of Obaseki in Edo state in the last four years, spoke well of him during the victorious campaigns of the past months.

Matawalle said that it is important for state executive governors to be focussed while in office in delivering good governance and dividends of democracy to the people because, at the end of the day, it is such performance that will speak for him during an election.

“I rejoice with you Godwin Obaseki as your people once again give you the opportunity to take command of your state. It has been a long political battle and you have fought a good fight and ended with a good victory. May Allah continue to guide you as you continue to serve your people, delivering to them the dividends of democracy, said Governor Matawalle.

“Gradually, more and more people in different states are getting to realise the commitment of PDP Governors. PDP as a party, has been more focused. And I believe that you joining the PDP and winning under the party’s platform, will not be in vain for you and for the people of Edo state. Congratulations my brother for the sweet victory,” Governor Matawalle added 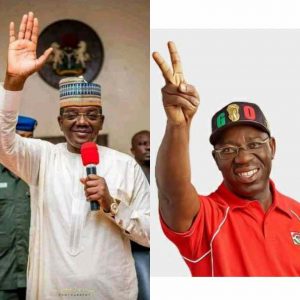 By: HighCelebritySquard   Dear Nigerians, Corona was a blessing and also a curse. A blessing because it reminded us of the importance of life and how the slightest negligence can result in a worse accident. It is also a reminder, of how the greatest asset of ANY government is their Human Resources and not their […]

By: HighCelebritySquard   Sky Capital & Financial Allied International Limited, a subsidiary of SIFAX Group, has appointed a new Managing Director, Mr. Maxwell Ideh. Ideh, a seasoned banking professional with over twenty years’ experience, is a 1994 graduate of Biological Science from the University of Lagos and also holds a Masters in Business Administration degree […]