Governor Muhammad Bello Matawalle of Zamfara State has vowed to demolish any house where bandits’ informants or weapons suppliers are living in the state.

The Governor made this known while responding to the Sokoto state governor, Hon. Aminu Waziri Tambuwal along with his Council members who came to commiserate with the government and people over the recent bandits attack in some parts of the state.
Matawalle said he has instructed for serious punitive measures including the demolition of any house where informants, weapons suppliers and people who are aiding banditry activities are arrested in the state with immediate effect.
He said, the action became necessary in order to fully address the resurgence of armed banditry activities in some parts of the state which is being aided by the people who are living mostly in the cities and providing information to the bandits in the bushes.
Matawalle further said the activities of the informants is creating a lot of problems in the ongoing fight against banditry in the state and called for the support of citizens in the state in order to win the fight.

He also urged traditional rulers in the state to keep vigil and monitor the activities of landlords in giving out houses for rent, directing them to report any suspicious movement to security agencies for immediate action.
The governor explained that if actions like monitoring movements of suspicious characters are taken, the killing of innocent souls will reduce significantly in the state.
Earlier, Sokoto state governor, Hon. Aminu Waziri Tambuwal said he was in Zamfara State to commiserate with the government and people of over the recent unfortunate killing of innocent souls in some of the state which he described as “devastating and tragic.”
Tambuwal who noted the killing of innocent souls as a serious calamity prayed for the repose of the souls of those lost during the attacks.
The Governor said that they were happy with the commendable efforts taken by Matawalle in handling bandits activities which decimated killings and other crimes since the coming of Matawalle’s administration and will not accept the sudden sad resurgence of the banditry.
Tambuwal leds members of his Executive Council in prayers for an end to the killings bedeviling the country.
The visit was attended by the Secretary to the Zamfara State Government, Alhaji Bala Bello Maru, Head of Service, Alhaji Kabiru Balarabe, Chief of Staff Government House, Col Bala Mande rtd, Deputy Chief of Staff Government House, Dr. Bashir Mohammed Maru, state PDP Chairman, Alhaji Tukur Umar Danfulani, Commissioners, Special Advisers, Permanent Secretaries and Directors-General among others. 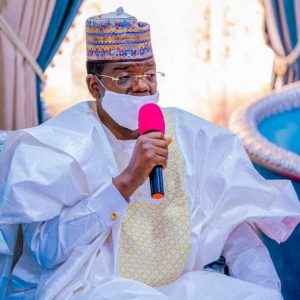 By: HighCelebritySquard   First Bank of Nigeria Limited, Nigeria’s premier and leading financial inclusion services provider, will host an SME webinar themed “Rebuilding your Business” by 10am on Tuesday, 10 November 2020 via Zoom meetings. The event is organised in collaboration with FBN Insurance Brokers and FBN Quest with its discussants including: Tunde Owolabi, Group […]

Posted on May 6, 2021 Author highcelebrity

By: HighCelebritySquard   The Lagos House of Assembly is currently considering a bill to establish the state’s Legislative and Research Institute. The bill scaled second reading on Tuesday with members of the House speaking glowingly about its advantages. The private-member bill sponsored by the Speaker of the House, Rt. Hon. Mudashiru Obasa, aims at building […]

‘Kantara Students Kidnap Was A Set-Up, They Are Between Nigeria And Niger Republic’ – Primate Ayodele