‘The Minister of Niger Delta Affairs, Godswill Akpabio, sexually harassed me and I gave him a dirty slap’ those were the words of the.former Managing Director of Niger Delta Development Commission, Joi Nunieh, on Monday during an interview on Arise TV.

She said, “Why did he not tell Nigerians that I slapped him in his guest house at Apo? I am the only woman that slapped Akpabio. He thought he could come up on me. He tried to harass me sexually.

“I slapped him. He tried to come on me. I am an Ogoni woman and nobody jokes with us. I showed Akpabio that Rivers women do not tolerate nonsense.”

The interviewer, Reuben Abati, asked whether she was accusing Akpabio of rape or sexual harassment, Nunieh said, “Harassment sounds better, not rape.

She also accused Akpabio of trying to inflate the NDDC budget.

Nunieh added that the minister directed her to include some projects from the refugee commission in the budget of the NDDC. 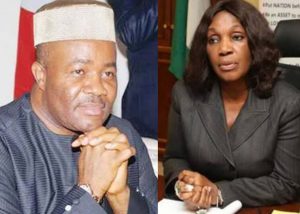 #EndSars: Reform The Nigeria Police To Save Our Future By Yusuf Babalola

By: HighCelebritySquard   Just as the showbiz veteran had said a couple of days ago that “Our Mumu Don Bellefull Us”, it speaks of the height of intimidation, harassment and reckless killing of the Nigerian youths by the Nigerian Police, and the resultant consequence of revolt as we are experiencing since the last one week […]

By: HighCelebritySquard   The Chief Executive Officer of Quincy Herbals Naturopathic and Wellness Centre, Mrs Olasumbo Ayodele, has said herbal medicine could be used to prevent and manage COVID-19 symptoms. Ayodele, in an interview with our correspondent, praised health workers in the frontline of fighting COVID-19, urging the Federal Government to carry herbal medicine practitioners […]

By: HighCelebritySquard   Zenith Bank Plc has again emerged as the Number One Bank in Nigeria by Tier-1 Capital in the 2020 Top 1000 World Banks Ranking published by The Banker Magazine. Climbing a whopping 29 spots from 415 in 2019 to 386 in the 2020 global ranking of banks, Zenith Bank retained its position […]

Obasa: The Yoruba Man Who Predicted Amotekun 4 Years Before Its Establishment