Residents of Jakande Estate, Mile 2, Amuwo Odofin Local Government Area of Lagos State have called on the State Government to intervene in the activities of Lagos Building Investment Company (LBIC) and Lagos State Taskforce on Environment LSTE’s bid to take over their community recreation park from them.

The residents, today held a peaceful protest calling for the intervention of the State Government on the suspected land grabbers using the office of the state government to hijack landed property meant for the community purposes.

With different inscription of placards which reads; ‘LBIC Handoff Our Utility Space’, ‘Don’t Flood Our Homes’, Dictatorship Is An Affront To Democracy’. ‘Don’t Deny Us The Right To A Decent Living.’ Don’t Stop Ventilation Here’.

The protesters which observed and maintained Covid-19 guidelines and protocols with the use of face masks and keep social distancing which includes old and young community residents decried the unwarranted and illegal incursion into the neighborhood land around the community.

An elderly man, Mr. Gabriel Amidu, who spoke had a chat with me during the demonstration, said he has been living in Jankande Estate in Mile 2, for the past 40 years. He said, “This is not the first time Lagos Building Investment Company (LBIC) will be attempting to sell off this parcel of 1,300 square meters of land meant for the community utility purposes.

He said; “In 1997, they sold this land, and the community protested, but with the intervention of the current Chairman National Drug Law Enforcement Agency (NDLEA) and former Military Governor of Lagos State, Rtd. Muhammed Buba Marwa they stopped the process of the sales of the land. But 24 years later, they are now back to resell the land to faceless and unknown developers. We challenged them and demanded who the developers were but they refused to disclose to us.”

He said; “they intends to set up high raising four structure buildings of single bedroom to multiple numbers of people living here besides 13 blocks, 6 flats that are 78 families as each flat has a minimum of 5-8 families. We cannot allow them to build such structures and deprive us of fresh breathe which is dangerous to our health. The land is also prone to flooding.” He said.

As for Mrs. Laleye Ajoke, she said; “we are handicapped and want the State Government to help us on this matter. Taking recreation parks from us is like preventing the community from enjoying their lives. We use these pieces of land for many things; parties, car parks and for our generators.”

“The land is a community land, and its for recreational utility so, selling this land will be inimical to us as residents. We are agents of progressive, we are therefore urging Mr. Governor to use his good office to address this issue amicably and please stop them from selling off the land. The land is 1,300 square meters and its meant for community car park, childrens’ playing ground, and utility purpose said Mr. Thompson Tom.

The community is therefore, pleading to the former Governor of Lagos, Senator Bola Ahmed Tinubu, and current Governor Babajide Sanwo-Olu, to come to their rescue and intervene in the matter. 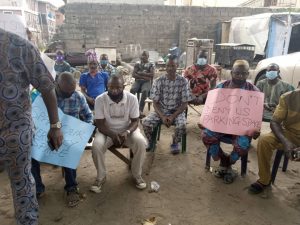 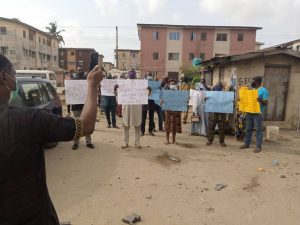 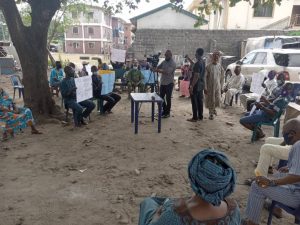 By: HighCelebritySquard   The attention of the Nigeria Police Force has been drawn to a misleading report published on the Sahara Reporters online platform on August 03, 2020 under the heading ‘Exclusive: How Nigeria’s Inspector-General of Police, Adamu, Illegally Raised Millions of Naira for Construction of Training School in Nasarawa’. In the report, spurious allegations […]

By: HighCelebritySquard   This is to inform the general public that the picture of the new Prince has not been released to the public. We equally all Nigerians home and abroad to disregard the two viral pictures in circulation misrepresenting the newly born heir to the ancient sacred throne of the Ooni who joined the […]

By: HighCelebritySquard   …President Buhari, WTO’s Okonjo-Iweala Support Lagos’ Growth Plan …‘It’s Time To Create Youth-Focused Economy’ – AFDB President Lagos State has set off an ambitious plan for its development over the next decade. By 2030, the State, which has the 5th largest economy in Africa, will have a running city-wide network of colour-coded […]