The Lagos State Grassroots Soccer Association alongside the Barrister Dr. Taiwo Olayinka Afolabi Foundation is at it again. For the fifth time counting, the two bodies are coming together to celebrate one of Nigeria’s most successful businessmen and boardroom giants, Barrister Dr. Taiwo Afiolabi, Member of the Order of the Niger (MON) who will be celebrating his birthday coming up on the 29th of April, 2021. The football competition is scheduled to take place at the Campus Mini Stadium, Ajele in Lagos Island. The Under 17 girls will show their God-given soccer skills by 1pm while the Under 17 boys do theirs by 3pm. Co-sponsored by the Sifax Group, the soccer event is not only meant to celebrate the birthday of the living icon of grassroots soccer in Lagos State but to showcase the immense skills of the younger generation of Nigerian footballers who are potential heroes of the future.
The 5th edition of the Annual Under-17 boys and girls Taiwo Afolabi Cup 2021 is a well accepted philanthropic gesture by the important stakeholders including the Lagos State government via the ministry of sports, top businessmen, celebrities, dignitaries and the Eko youths in particular. Same applies to all the young boys and girls scattered in different parts of Lagos State. It is a venerable and commendable step by the Sifax Group boss whose business acumen and achievements cuts across strategic sectors of the Nigerian economy, creating avenues of better livelihood and providing job opportunities to thousands of Nigerians and expatriates alike. He alongside his twin brother will surely be the cynosures of all eyes on that particular day. 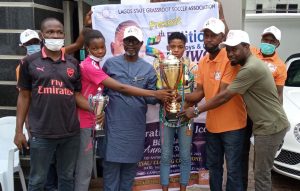 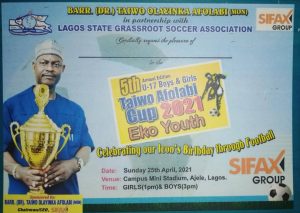 By: HighCelebritySquard   Ecobank Nigeria Limited has recorded $90 million Profit Before Tax (PBT) in the first quarter ended March 31,  this year. Operating income (net revenue) stood at $393 million, up one per cent on a reported basis and 14 per cent in constant currency while operating expenses of $259 million, up one per […]

By: HighCelebritySquard   Zenith Bank Plc, Nigeria’s leading financial institution, has introduced an automated voice banking service, an interactive voice response (IVR) solution which enables customers to perform basic banking transactions by dialing a dedicated phone line through their registered phone numbers and following the prompts. By simply dialing +234 (1) 278 7000 from the […]

By: HighCelebritySquard   Ecobank Nigeria has launched a radio programme – “Ecobank Business Hour” targeted at empowering small and medium enterprises (SMEs) in the country. Emeka Agada, Head, SME, Ecobank Nigeria, says the programme which is being syndicated across 10 radio stations in Nigeria is one of the several initiatives the bank is deploying to […]

LAWMA Clamps Down On Cart Pushers