Governor Bello Mohammed (Matawallen Maradun) has decried the lack of respect for  leadership in the North, specially for traditional institutions, which is the main cause of indiscipline in  our Youth.

Governor Matawalle, who said, today, the North is in dis array due to lack of recognised central leadership who can commonly be rallied around socially and politically, also linked the lack of it to the growing absence of peace in many of our societies, catapulting to the present menace of banditry, kidnappings and robbery.

He made these observations when the communities of Anka, Bungudu, Bukkuyum and Maru, paid him a courtesy call led by their respective Emirs and Local Government Chairmen at the Government House today.

Governor Matawalle further observed that no society can progress and enjoy a lasting peace when it looks down upon its leaders with disrespect. “That is why I directed that this year, I will receive no community at the Government House except it is led by its traditional ruler”, Matawalle pointed out.

“We must start according respect and dignity to our rulers like it was before, because Allah gave them the position which we have to recognise” Matawalle observed. “That is why today, my administration is providing a Government Lodge in each of the 14 Local Government Areas of the state so that henceforth, we shall be the ones going down to the Emirs’ palaces for Sallah homage to spend a day or two with them and their people at the grassroots” Matawalle disclosed.

Governor Matawalle also warned on the need to renew commitment to genuine fight against insecurity and its attendant consequences in the state. He said the war is not limited to the Government or the security agencies alone, but it is a concern of everyone.

“We have to look inwards and flush out the bad eggs among us. Most of the atrocities perpetrated by the bandits at the grassroots indicate a connivance with informers who live among us in our communities . We must flush them out because we all know them”, the Governor charged the people.

“Henceforth, my administration has resolved not to have it easy on anyone arrested for the charge of being an informant to bandits anywhere in the state”, Matawalle announced.

All the visiting communities promised to renew their commitment to the attainment of lasting peace in their respective areas and also commended the efforts of the administration of Governor Matawalle for what it has so far been doing to end the spate of insecurity disturbing many parts of the state. 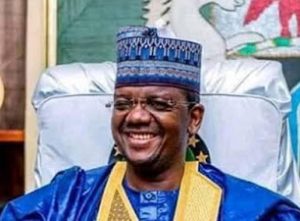 By: HighCelebritySquard   Lagos State Governor, Mr. Babajide Sanwo-Olu, has congratulated his Ondo State counterpart, Arakunrin Oluwarotimi Akeredolu (SAN) on his victory in last Saturday’s gubernatorial election in the State, describing it as well deserved. Sanwo-Olu, who is the chairman of the All Progressives Congress (APC) National Campaign Council for Ondo State Governorship election, said […]

By: HighCelebritySquard     There was jubilation on the Akoka, Yaba campus of the University of Lagos (UNILAG) when news of the reinstatement of Prof. Oluwatoyin Ogundipe as the institution’s Vice Chancellor filtered in last night. The Nation learnt that the Federal Government had approved the White Paper by the Visitation Panel which investigated Ogundipe’s […]

2023: Tinubu Has Our Support – Igbo Group In Lagos

By: HighCelebritySquard   An Igbo group in Lagos State has declared its support for the National Leader of the All Progressives Congress (APC), Asiwaju Bola Ahmed Tinubu, ahead of 2023 should the latter agree to contest the presidential election. The Obasa Movement, Ndigbo branch, in Lagos made the promise when its members paid a courtesy […]

Imposition Of Monarch Not Part Of Our Tradition, Says Oloto Royal Family

K1 Preaches Peace And Safety As He Marks First Year As 1st Maiyegun Of Yorubaland!