The Nigerian Guild of Investigative Journalists (NGIJ) has berated the Lagos state government for adopting a weak and defective approach in handling lockdown palliative measures especially the disgraceful emergency food pack distribution, despite performing well in curtailing the COVID-19 pandemic so far.

This lapse, the Guild lamented, has resulted in widespread condemnation for the government as well as allegations of negligence and insensitivity from the residents of the state, including the CDA representatives and the general public who received beggarly and pitiful portions of foodstuff during the distribution.

In a statement released to the media on Monday, Mr Israel Bolaji, Vice President (Information and Strategy) of the Guild, said whereas the state government’s efforts at curtailing the pandemic were commendable, its palliative measures for residents especially the emergency food pack currently being distributed to residents is disgraceful, poor and ineffective, charging Gov. Sanwo-Olu to urgently revisit and overhaul the lockdown palliative plan.

The spokesman said as expected and applicable globally, Lagos State government came up with an apt idea of providing food especially for aged parents, widows, widowers and less privileged households with an emergency food pack.

However, the selective distribution approach shrouded in mystery, beggarly food pack quantities, lack of transparency and alleged large scale diversion of the food packs by officials makes a mess and mockery of the entire process.

Bolaji said the guild was shocked and appalled by the various reports and the attendant disillusionment generated. NGIJ has been inundated with reports, viral video accounts and verified cases of residents receiving pitiful food packs, including multiple videotaped cases of two sachets of tomatoes, and two bowls of rice and beans given to an entire street.

For example, there are embarrassing accounts from Ijede communities under Ikorodu constituency made up of 127 CDA, where each of the CDAs was asked to compile a list of names of aged parents, widow, less privileged and widower with at least 40 in some and some between 50 and 80 names submitted since last week Sunday.

Surprisingly on Saturday only five packs were handed for 80 persons for my own CDA, said one of the CDA representatives.

“In my CDA at Agege where 40 names were forwarded 5packs for 40 persons. I did not know what is going on because personally, the government is not fair to us. If they want the emergency food to go around I believe religious bodies, stakeholders and Royal father should be part of the programme, said another source.

“Many of the CDAs here did not have at all, a source said, adding that the local government chairman kept the food packs for sharing to their members later.”

The Guild charges the government to show more sensitivity to the people considering that the lockdown had crippled the economic activities as well as the source of livelihood for many residents. As much as the government may not choose to share food packs to all residents, a basic threshold is at least expected to be met. Giving 5 units of very small food pack to an entire street of about 2000 people amounts to reckless insensitivity, humiliation and travesty.

We also urge the government to be transparent in handling the disbursement of the various donations from well-meaning Nigerians, philanthropists and multinationals that have donated handsomely to cushion the impact of the crises. 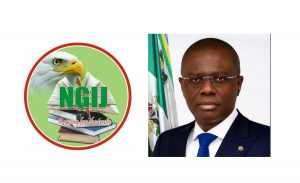 By: HighCelebritySquard   ….Officials Of Ecobank, Wema Bank And Polaris Have Absolved The Speaker Of The Lagos State House Of Assembly, Rt. Hon. Mudashiru Obasa Of Allegation Of Operating Multiple Bank Accounts In The Banks. Some representatives of the banks spoke before the 9-man House Adhoc Committee on fact finding and investigation on the corruption […]

By: HighCelebritySquard   The Speaker of the Lagos State House of Assembly, Rt. Hon. Mudashiru Obasa, has promised that his party, the All Progressives Congress (APC) in Lagos, will never disregard its members and supporters. Obasa, who made the promise this when he received the APC Women in Barracks (Lagos West branch) who paid him […]

By: HighCelebritySquard   …Governor: “I Implore All To Celebrate Moderately With Our Families” Lagos State Governor, Mr. Babajide Sanwo-Olu has congratulated Muslims in the State on the successful completion of this year’s Ramadan fasting and the celebration of Eid-el-Fitri, urging them to continue on the path of spirituality and peaceful co-existence among every Lagosian. Sanwo-Olu […]

No Ransom Was Paid On 26 Kidnapped Girls – Zamfara Govt Insist.