Kehinde Oloyede Almotuf who is popularly known as Kendoo does not need introduction in the political terrain most especially in Oshodi/Isolo axis. The philanthropist turned politician has been a force to reckoned with when it comes to grassroot politics in Lagos. His mother, Alhaja Taiye Almoruf, a former Iyaloja who doubles as an activist and one of the top three political stalwarts in Oshodi we learnt is in full support of her son’s political moves. Kendoo as the cool businessman is fondly referred to has contributed immensely well towards the development and upliftment of the people within and outside his community. Following his unrelenting spirit of contributing into human lives, some Youths and elders within his political party have tipped and endorsed him as the next chairman of Oshodi/Isolo local government.  Interestingly, Alhaji kehinde was one of the first to bring investor to developed the economy of oshodi and contributed to the infrastructural development of the community.

It should be noted that kendoo was responsible for the construction of Macarthy road, drainage and illumination of same street as far back as year 2000. He has also provided Borehole water system at brown street, Aduke Thomas street and Emmanuel street in oshodi. Aside the Youths Kehinde has been endorsed by the party leaders, market women and the chairman and members of the NURTW in oshodi. 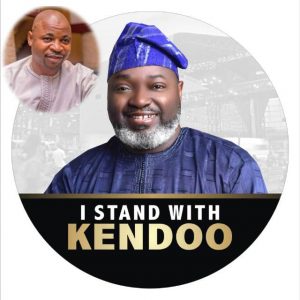 By: HighCelebritySquard   The Force Intelligence Bureau (FIB) will soon be detached from the Force Criminal Investigation Department (FCID) so that it can become a full-fledged Department. The Inspector General of Police (IGP), Mohammed Adamu, disclosed this in a memo he personally signed. He said after the FIB is excised from FCID, a Deputy Inspector […]

By: HighCelebritySquard   …Praise His ‘Professionalism, Proactiveness In Media Engagements’. The National Association of Online Security Reporters (NAOSRE) has fecilitates with the Lagos State Police Command Public Relations Officer, Bala Elkana on his new promotion to the rank of Superintendent of Police. NAOSRE is a body of All investigative and Online Journalists covering the security […]

By: HighCelebritySquard   First Bank of Nigeria Limited, Nigeria’s premier and leading financial inclusion services provider has announced its variant account products – KidsFirst and MeFirst – created to encourage the right savings culture among children from 0 – 17 years. The offerings have relevant enhancements including appropriate parental guidance and financial discipline for children […]