The Lagos State Commissioner of Police, Hakeem Odumosu, on Tuesday, paraded a commercial boat helmsman, Bimbo Elebiju, for allegedly causing the death of 12 of his passengers while conveying them to their destinations.

The victims were said to have drowned after the wave of a ship sailing along the Kirikiri waterfront made the boat, which engine had been switched off during an argument between Bimbo and his passengers over the fare, to capsize.

Odumosu, while parading Bimbo at the command headquarters in Ikeja, said 20 passengers boarded the boat from Kirikiri to Badagry, but while on the way, the passengers disagreed with the helmsman on the fare.

Odumosu said Bimbo indicated that the fare was N1,500, but the passengers insisted on paying N1,200, adding that the helmsman switched off the engine of the boat by the waterfront because of the N300 difference in fare.

He stated that when the ship sailed along, the wave made the boat to drift towards a stationary barge, where it capsized, adding that Bimbo jumped into the water, abandoned his passengers and escaped.

While five passengers were rescued, the CP said 10 others drowned, adding that the rescued passengers gave an account of Bimbo’s action before the tragedy struck.

He said Bimbo was trailed and arrested, adding that he would be charged.

Odumosu stated, “On July 29, 2020, around 5.45pm, our marine operatives received a distress call that a commercial boat with the inscription: ‘Mount Zion Transport’, fitted with 150HP Yamaha outboard engine, which was conveying 20 passengers from Kirikiri to Badagry, drifted towards a stationary barge and capsized along the Kirikiri waterfront.

“Five passengers were rescued, while 12 corpses were recovered. Three people are still missing. The helmsman, Bimbo Elebiju, swam to safety. Investigation revealed that the accident was caused by the deliberate act of the helmsman. There was an argument between the deckhand and the passengers as to the transport fare.

“Bimbo insisted on N1,500 per passenger and the passengers said they would only pay N1,200 each. Because of the N300 difference, the helmsman turned off the engine on a turbulent waterfront. A big ship passed and stirred the water, creating a wave that made the boat to drift towards the stationary barge. The suspect was trailed to his hideout and arrested after the survivors of the accident gave the true account of what happened. He will be charged.”

“Bimbo insisted on N1,500 per passenger and the passengers said they would only pay N1,200 each. Because of the N300 difference, the helmsman turned off the engine on a turbulent waterfront. A big ship passed and stirred the water, creating a wave that made the boat to drift towards the stationary barge. The suspect was trailed to his hideout and arrested after the survivors of the accident gave the true account of what happened. He will be charged.”

Odumosu said, “The principal suspect, who claimed to be the ruler of the Oguntedo community, had been mobilising armed men to unleash terror on indigenes of Ashaogun community over a period of time. The attacks usually come with sporadic gunfire and killing of innocent persons.

“After the attacks, the suspects usually go into hiding. On March 18, 2020, and July 18, 2020, the same set of people killed one person and injured several others. It was also revealed that the suspects had participated in a series of robbery operations in Satellite Town and its environs.

“The DPO, Satellite Town Police Station, Chike Oti, ensured the capture of the criminal dynasty of the self-acclaimed traditional ruler of Oguntedo community. Investigation is ongoing and the suspects will be arraigned as soon as investigation is concluded.”

Also paraded were members of kidnap syndicates, including Ayeni John, 45; Tijani Gafari, 38; Ojonla Oyetakin, 30; and Paul Orimisan, 38, who were alleged to be terrorising and kidnapping Lagos residents plying the waterways.

The suspects were said to have kidnapped a Syrian along the Eko Atlantic waterway in Lagos.

While Ojewole Saburi, 26; and Olawale Samson, 28, were nabbed for unlawfully possessing firearms, a fake soldier, Yemi Ayeni, 32, was charged for assaulting a policewoman, Inspector Martina Onyeacho, in a footage that went viral recently.

In the last one month, Odumosu said the command had arrested 27 suspected armed robbers and 15 traffic robbers, and successfully foiled 22 traffic robbery attempts, adding that two robbery suspects died during exchange of gunfire with the police. 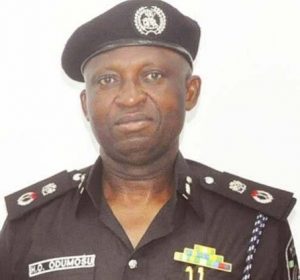 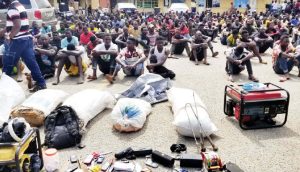 By: HighCelebritySquard   Sequel to the commitment of the Commissioner of Police, Lagos State, CP Hakeem Odumosu, to continually take anti crime fight to the dens of criminals and miscreants in the state, the Police Command has arrested 27 suspects in a planned raid of different blackspots in the Lagos metropolis between the late hours […]

By: HighCelebritySquard   Heritage bank Plc in collaboration with the Central Bank of Nigeria (CBN), under the Nigerian Incentive-Based Risk Sharing in Agricultural Lending (NIRSAL) has continued to drive improved investment outcomes and job creation. Through this partnership, Heritage Bank is not relenting in its efforts at boosting the agriculture base of the nation to […]

By: HighCelebritySquard   A yet-to-be-identified man was killed in a road accident that occurred on the Benin-Ore Expressway in the Odigbo Local Government Area of Ondo State on Friday. The accident was said to have involved a Nissan Vanette Bus with registration number REL882XA and a DAF Truck with number LAR 261XV. It was gathered […]

Posted on May 7, 2021 Author highcelebrity