Nigeria’s foremost luxury and lifestyle company Polo Limited, as part of its multi-level intervention in providing succour for segments of the society affected by the COVID-19 lockdown recently visited the press corps of the Lagos State Government.

In charting a different path from the norm of donations so far, the company delegation led by the Managing Director, John Obayuwana and Executive Director, Jennifer Obayuwana visited members of the fourth estate attached to the Governor’s office at the Bagauda Kaltho Press Centre Alausa Ikeja, Lagos.

The Chief Press Secretary to the State Governor Mr Gboyega Akosile welcoming the delegation appreciated the visit and gesture in glowing terms adding that it takes a really thoughtful company to think of donating items to journalists working in a war situation.

He commented ‘it has been an unusual period for the press corps since the outbreak of COVID-19 in Lagos and they have played a very significant role in the successes that Lagos State has achieved in tackling the pandemic.

My colleagues have made my job worthwhile and have exhibited unusual dedication to their assignment in spite of the associated dangers. It is that dedication that has made a company like yours think of them in this period because journalists are not often thought of by most donors’.

John Obayunwana leader of the Polo delegation stated that ‘you all are in the frontlines reporting from the theatre of war. Your work has done a great deal to stem the tide of fake news which was becoming an ‘infodemic’ and had the capacity to worsen an already bad situation’.

He added, ‘we have been able to separate the wheat from the chaff by following the briefings from the appropriate health authorities. We watch you on TV asking the right questions in a bid to provide quality reportage that adequately informs the public. This has allayed our fears and helped to calm frayed nerves which many of us had at the beginning of the outbreak. By going to the isolation centres, by gathering for news briefings almost on a daily basis, by going to different communities in different parts of the state to report news about the pandemic as it breaks, you have put yourselves in harm’s way and such is very commendable. He concluded ‘ this is the third leg of our outreach today and we have come with some items to appreciate you and to encourage you to keep the torch of good reportage aglow’

Speaking further, Jenifer Obayuwana, Executive Director Polo Group said, ‘we were extremely excited at the idea to reach out to a segment of society which many people seem to have forgotten at this critical time in human history – gentlemen and ladies of the fourth estate. We are here today as a result of that excitement and we greatly commend the work that you have been doing since the outbreak of Corona Virus in Nigeria. You have done a yeoman’s job and deserve all the love and commendation you can get. A depth of gratitude goes to every one of you who has defied the odds to be at work at such a time as this’.

Responding, the Vice Chairman of the Press Corps Mrs Adeola of Lagos Traffic Radio expressed the appreciation of her colleagues to Polo and received the packages on their behalf.

Stemming the tide of fake news during the COVID-19 pandemic deserves commendation and accolades. Those who ensure that proper and relevant news is disseminated are the members of the fourth estate and they have done a yeoman job since the outbreak of the pandemic in Nigeria. 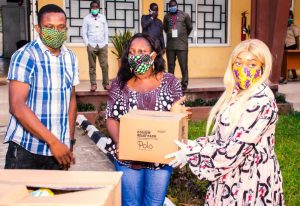 How Our Monarchs, Parents Can Truly Preserve Yoruba Language – Obasa

By: HighCelebritySquard   …Olota of Otta honours Speaker with traditional title …Says Obasa’s leadership of the Assembly has benefitted Awori people in Lagos The Speaker of the Lagos State House of Assembly, Rt. Hon. (Dr) Mudashiru Obasa, has urged traditional rulers in the Southwestern part of Nigeria to continue to protect the culture and tradition […]

By: HighCelebritySquard   Real Estate guru , Cheif Executive Officer of Labo Business Group , Olabisi Akanbi has been honoured for his support for youth development , talents in Nigeria. Labo boss, who is at the top of affairs was recognized for his philanthropist and support for the creative industry and real estate maven in […]

Innovations, Disruptions Will Continue To Define Future Of Banking In Nigeria – Akinwuntan

By: HighCelebritySquard   The Managing Director, Ecobank Nigeria, Patrick Akinwuntan has reiterated that the future of Nigerian banking would continue to be shaped by innovations and technology disruptions, stressing that only financial institutions that are amenable to such transformation will remain relevant in the sector. According to Akinwuntan, there was no way banks can remain […]