“….I did not know what I was signing up for until I saw the first budget. I never knew it will be this financially intensive but I thank God it’s all a reality and successful story today. – Mr. Mobolaji Ogunlende, Pioneer RAK Foundation”

“….we cannot compare RAK to other meaning Nigerians, they have more than enough but they don’t use it. Chief S.H Amosu Baale TOGA”

“…It was a great news when the Lagos State Government under the leadership of His Excellency, Governor Babatunde Raji Fashola gifted us this transformer in 2015, but our happiness was soon short-lived when the transformer was abandoned till then, all effort to energize it through letters, calls, visit and the likes were futile, at a time we resigned to fate thinking that some witches and wizards were responsible for our plight.” – Mr. Lukman Lawal O., Chairman Transformer Committee, Toga-Todovi.

Mr. Mobolji Ogunlende of RAK Development Foundation has once again set the year running with his unbeatable humanitarian service to the people as residents of Toga-Todovi community in Badagry express joy and appreciation to the foundation for the successful installation and electrification of their community which has been in total darkness for over five years.

Mr. Mobolaji Ogunlende while giving his address said “I have always said it is not about me, it is about doing what Almighty Allah asked us to do via quenching thirst, inspiring change and empowering generations which are our guiding principles at RAK foundation

The Community reached out to me about fourteen (14) months ago and I called them in for a meeting and they said they had transformer but have not been able to connect it for over 6 years ago. That was how our journey began.

Ogunlende said “for miracles to happen, there must be obstacles, we thank God we are able to overcome the many obstacles as an NGO and as a Community.

I am glad I am answering my calling and I am fulfilled the community is happy.

Mr. Lawal Lukman Olajide, Chairman Transformer Committee, Toga-Todovi Community in Badagry while giving his address said “It was a great news when the Lagos State Government under the leadership of His Excellency, Governor Babatunde Raji Fashola gifted us this transformer in 2015, but our happiness was soon short-lived when the transformer was abandoned till then, all effort to power it through letters, calls, visit and the likes were futile, at a time we resigned to fate thinking that some witches and wizards were responsible for our plight.” Lawal said.

“We got to know about RAK during his yearly Ramadan Free Feeding program and something inspired us to reach out for some support. To our greatest surprise, we received his feed back that he is ready to support, and here we are today, a six years abandoned project is now fully funded by an indigenous NGO, indeed we are glad and we cannot but continue to thank this young God sent” Lawal expressed.

Lawal said an average population of not less than five thousand household in the area will be benefiting from this singular act of kindness of Mr. Mobolaji Ogunlende.

Todovi community has 7 CDA Chairman, with not less than five thousand household. In it we have people whose businesses require light and will be resucitated and the economic viability of the area will be restored to normal.

RAK Foundation Engineer, Mr. Agbeleye Hakeem explained that the entire electrification project is estimated at about ₦5.2 million, which includes the purchase of concrete poles and fixing, aluminium conductor, cross bar, insulators and so on and other administative charges.

Hakeem explained that at a particular period, hoodlums came to steal the upriser and some of the equipments bought by RAK, but the pioneer was focused and magnanimous enough to have continued with the project even in the face of the challenge.

In his words, Chief S.H Amosu, Baale of Toga said “…today is a great day, it’s a day the Community can never forget in Badagry Local Government and Olorunda LCDA. RAK Foundation and his team have done a wonderful job in this community, the whole people of this Community are all happy today.

He lamented that ‘although the LASG had provided the community with transformer over five years, the community could not afford to power the transformer due to the huge cost involved in the purchase of heavy electrical equipments, poles and other administative fee.

About 5 years ago the LASG had donated this transformer but no financial ability to power it, all effort to power the 33KVA transformer proved abortive, but we thank God after writing to RAK Foundation, our dream came into reality. We thank Mr. Mobolaji Ogunlende so much. Amosu added.

The Baale of Toga- further said “we cannot compare RAK to other people with means, they have more than enough but they don’t use it.”

Some of them have more than enough but prefer to take their money abroad, some hide it in their houses and when they die, it’s no longer useful to them.

The Baale however charged other well meaning Nigerians, especially Badagryians to follow the footstep of RAK Foundation pioneer.

According to Chief Mobee Viavo Emmanuel, Baale of APANUKOH, Badagry Kingdom he expressed this;

“The project we are Commissioning today is Electrification of a transformer that has been dropped by the State Government to us and without powering it for about 5 years.After sometime we are able to meet Mr. Mobolaji Ogunlende of RAK Foundation who helped us, he is a God sent” he said.

RAK has really touched our lives, he has touched our heart, because the project is about ₦6m project Chief Mobee added.

This project will go a long way in adding value to our people and improve the healthy living of our children and family. I want to thank the CEO of RAK and pray God will help him in his endeavors.

Another resident of the community who do not want his name disclosed said “it is pitiable that the government who is supposed to be responsible for this had abandoned their primary responsibility”.

He further thanked RAK Foundation for coming to their rescue. The entire community is behind you and we will not stop praying for you” he added

Wuraola Sewenu, a female resident in the area said “before our messiah, RAK came to our rescue we had faced alot of challenges such as low sales for women who are doing their petty trade and requires light including our husband who do related works like weldering, barbing, electrician etc. Also our children have before now faced certain health challenges. She said

We thank RAK Foundation for his huge support and we pray that God will continue to protect him and lift him high”.

Mrs. Cole Oluwakemi another resident in the area thanked the pioneer, saying;

“We thank our father, RAK Foundation, Mr. Mobolaji, he really tried for us, because for about seven to eight years we relocated to this area, we have been suffering from this light problem. At a particular time I told my husband that we just came to suffer ourself here, no cold water, no light, even at night we find it difficult to cook for our husband, but today we thank God it’s a thing of the past.” 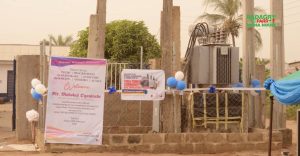 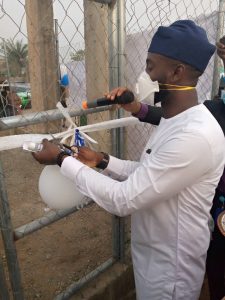 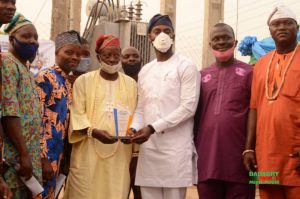 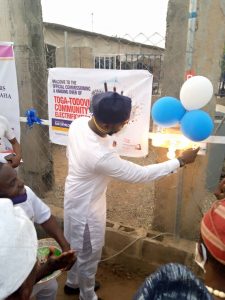 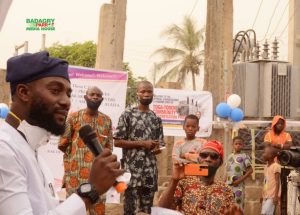 By: HighCelebritySquard   The Speaker, Lagos House of Assembly and Chairman, Conference of Speakers of State Legislatures in Nigeria, Rt. Hon. ( Dr.) Mudashiru Ajayi Obasa, has congratulated both President Muhammadu Buhari and Governor Babajide Sanwo-Olu on their fifth-year and first-year in office respectively. Obasa in his congratulatory message to mark May 29, 2020, the […]

By: HighCelebritySquard   Idumonza Iluobe Isidahomhen, the Social Democratic Party, SDP, aspirant in the September 19 governorship contest in Edo State, has congratulated Alhaji Aliru H. Momoh {Ikelebe III}, HRH Momodu II {JP}, The Ogirrua of Irrua and Okaijesan of Esanland including Muslims nationwide on the successful completion of Ramadan. He also shares these joyous […]