Our attention has been drawn to the mischievous and regrettable savage attack by Kola Ologbondiyan’s PDP on our party, All Progressives Congress (APC), which is also an attack on a key objective of South-East APC Presidency Project 2023, that is, to use promise of Nigeria’s President of South-East extraction on APC platform in 2023 to attract decent and progressive individuals still in PDP and other parties to APC.

According to Ologbondiyan, National Publicity Secretary of PDP, “Nigerians expect a few credible individuals still trapped in the APC to immediately leave that pirate ship before it is too late.”

We beg to differ from the PDP on this, as we disagree with them on many of their other jaundiced views. Contrary to the false picture they have painted, the predatory elements in the President Buhari administration are not APC.

They are persons known or unknown to President Buhari who are either PDP or have no known party allegiance. Their mission in the administration is simply to pillage and vicariously give APC a bad name. They are mercenaries in the administration – soldiers of fortune committing atrocities outside APC’s progressive manifesto and ethos.

What APC should do and must do with President of Nigeria of South-East extraction on APC platform from 29th May 2023, would be to sanitize the party by expelling the sort of PDP elements and other mercenaries who from 2015 to date have posed as APC members or sympathizers just to partake in a supposed APC-controlled Federal Government.

We say “supposed” because APC cannot be said to exert any influence in Government policies and actions that our detractors mischievously credit to APC.

That is what Dr. Salihu Lukman, Director General of the Progressive Governors’ Forum, alluded to when he said that some so-called APC leaders behaved like “criminal bandits”.

A true progressive does not shy away from the truth, even if opportunistic anti-people party like the PDP would quickly take advantage of our sincerity and desire to change-the-change in-house.

PDP is not a change agent and should not attempt to deceive Nigerians that it can ever be one; unless it is to change from bad to worst.

APC has a manifesto (a very fine one at that) and PDP should apologize to Nigerians for detailing its mercenaries in the Buhari administration – including Ministers, Permanent Secretaries, Agency CEOs, Board Chairmen, Directors, Security and Intelligence Chiefs – to ensure that policies, programmes, projects and practices of the Buhari administration are not reflective of the APC manifesto.

The agenda of South-East APC Presidency Project 2023 is also to religiously implement APC manifesto using only true APC members as government functionaries. APC has clear progressive ideology and that would manifest in the lives of all Nigerians with Nigeria’s President of South-East extraction from 29th May 2023.

Contrary to PDP mischief, it is the few progressive persons still in PDP (like Governor Dave Umahi of Ebonyi State, Governor Nyesom Nwike of Rivers State, Senator Enyinnaya Abaribe, and Kola Ologbondiyan himself) who should abandon that ship of notorious pirates and roguish characters for the progressive train of our great party, the APC.

Soon, very soon, APC-controlled Federal Government will not have any PDP or non-APC members anywhere near our corridor of power. The sanitization should start in the remaining lap of the Buhari administration but its full implementation would be guaranteed with President of South-East extraction on APC platform from 29th May 2023. 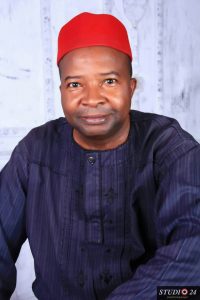 By: HighCelebritySquard   Indications have emerged to the effect that popular role interpreter, Saidi Balogun may be have kicked off with a rebranding process, hence his decision to pull down the photographs on his Instagram page. Insiders said the need to rebrand became necessary following the series of endorsements the talented actor has been getting […]

By: HighCelebritySquard   Highly anticipated movie, Omo Ghetto from Funke Akindele and ‘Mimi’ from Samuel ‘Bigsam’ Olatunji who incidentally was Funke’s former PR manager. Omo Ghetto – The Saga is a sequel to one of Funke’s popular movies telling the stories of Taiwo and Kehinde, one who is rich and classy and the other who […]

By: HighCelebritySquard   The security operatives attached to the Office of the Special Adviser to the Governor on Central Business Districts have apprehended large numbers of suspected Almajirai hidden in a truck transporting goods to Lagos at Apongbon area of Lagos State. Speaking on the arrest, the Special Adviser – Mr. Olugbenga Oyerinde, said the […]