The All Progressives Congress, Lagos chapter, has dissolved all sub-groups within the party.

The Mandate Group and Justice Forum, regarded as the powerful sub-groups in the party, were outlawed by the APC.

TheCable reports that the decision is coming two weeks after the Minister of Interior, Rauf Aregbesola, reorganised the Mandate Group without the endorsement of the National Leader of the party, Bola Tinubu.

The relationship between the two is said to be getting frosty, which may have contributed to the dissolution of all sub-groups within the Lagos APC.

A communiqué on Monday titled, ‘Engendering Party Discipline and Cohesion,’  signed by 27 chieftains of the APC, who are members of the Governor’s Advisory Council, said any member who continued to associate with any sub-group would be expelled.

It read in part, “Party members should no longer make use of these factions or their names with regard to future party business and activities. To continue to hold meetings in the name of these groups or to continue to promote such associations will amount to a violation of this resolution.

“The only permitted use of the names will be limited to historic references. Any violation of this decision is subject to party discipline, including suspension and expulsion. This prohibition extends solely to official party business. We are in no way trying to abridge anyone’s constitutional rights to free speech or assembly. The party chairman is hereby tasked with promulgating more detailed regulations with regard to prohibited and permissible activities for sub-party groupings.

“The party remains supreme. It has developed structures from the ward level to local government and state levels. These are recognised by the party’s constitution. They are adequate platforms for members to congregate and to present their views.

“The APC in Lagos is one party and one family. We must always act in this spirit if we are to attain the dream of democratic prosperity that we set out to achieve,” the communiqué said.

The party urged members to comply with the new directive in honour of June 12 and those who gave their lives to make democracy a reality.

Among those who signed the communiqués were Tinubu; Lagos Governor, Babajide Sanwoolu; the Deputy Governor, Obafemi Hamzat; and former governor Babatunde Raji Fashola.

But Tinubu, in a statement by his media aide, Tunde Rahman, said there was no dispute between him and Aregbesola.

He insisted that the decision to disband the factions was to promote discipline, harmony and cohesion and engender party supremacy.

“The former governor of Osun State has been unswervingly and wholly committed to the progressive ideology of the Tinubu political family.

“There is no war, cold or hot, between them. There has never been and there will never be. Asiwaju believes in him and he believes in the APC leader,” the statement added. 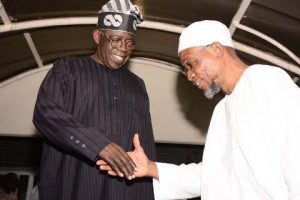 By: HighCelebritySquard   Judging by the difficulty caused by the deadly coronavirus epidemic which is seriously affecting the entire universe, the indefatigable and insurmountable Okoya family has donated several relief packages to the Lagos State government in order to salvage the poor and underprivileged within the state. The alluring industrial family went all out to […]

By: HighCelebritySquard   The Lagos State Environmental and Special Offences in (Enforcement) Unit (Task Force) today arraigned a fake female house agent, Mrs. Bukola Ayorinde, at a Lagos Mobile Court over fraud in Ikorodu. Speaking on the arraignment, the Chairman of the Agency, CSP Olayinka Egbeyemi stated that her arrest was effected after series of […]

By: HighCelebritySquard   Mouka, Nigeria’s leading manufacturer of mattresses, pillows and other bedding products, has won the Most Outstanding Foam and Mattress Company of the Year at the Nigerian Real Estate and Property Awards 2021 held in Lagos recently. The award was bestowed on Mouka for its laudable achievements in the sleep sector and its […]