…John Uche’s Many Sins Have Found Him Out

…Wants Ndigbos To Support The Ruling Party In Lagos

‘He is the number 1 liar among Igbos. He is the most consistent liar in West Africa. Even his good morning is questionable’ were the exact words used to qualify Chief John Uche by the President of Ohanaeze Ndigbo in Lagos, Chief Solomon Ogbonna Aguene on the startling revelations that has been found concerning the former Igbo leader.

The pioneer leader of the Ohanaeze in Lagos, John Uche who has been impeached as far back as 2001 for his scandalous and nefarious activities continues to parade himself as a nuisance to the public good of Igbos. Thus, it was loud jubilation among Igbos in Lagos when the current leadership of Solomon Ogbonna found out the incriminating documents.

‘Through our prayers and the efforts of the executives, we have fished him out. I see this achievement as my highest to be able to track down the Osama bin Laden of Igbos’, Chief Aguene remarked.

A press release that Trek Africa Newspaper got signed on 3rd of August 2001 titled:  ‘Impeachment of Chief John Uche as President of Ohanaeze Lagos state’  by the Enugu Central Body of Ohanaeze have wholesomely found Chief John Uche culpable for many fraudulent acts such as the C of O extortion, NNPC and NPA contract racket, almost swindling former Secretary-General of British Commonwealth, Chief Emeka Anyaoku of NGN 13.9million in a chieftaincy corruption scheme, political thuggery against Prof. Ben Nwabueze, moving the office of the organization to a public place like the National Stadium, usurping the role of the organization’s secretary among others.

As at 2001, the Mkpuke Committee recommended ‘John Uche is a man of questionable background. A criminal and one of the 419 kingpins in Lagos. It is because the business of 419 is no longer paying that this man is trying to hijack Ohanaeze in Lagos state at all cost.’

The Philip Umeadi-led committee concluded: ‘John Uche stands impeached and removed as a functionary of Lagos state either as President or Chairman and this must be publicized as broadly as possible.’

Therefore, it is criminal for Chief John Uche to keep causing disunity and rancour close to 20 years since the decision of the national body of Ohanaeze in Enugu, its headquarters. Proper prosecution of such a dubious man by law enforcement agencies is long overdue. And anyone that is associating with him is committing sacrilege according to the high customs of Igboland.

On his wisdom at bringing out this fact, Chief Ogbonna shared: ‘Before coming to this office, I made up my mind that I wanted to bring unity between Igbos and their host community and I know that leadership is sacrifice not enterprise. It is not a leadership of allocation so I know my relationship with others is what will uplift me. My wisdom is from God.’

‘For over 20 years of Ohanaeze, they always meet in beer parlours and backyard of homes but when I came I got a place where all Igbos can call home. A man must have two addresses – home and office. Since I knew John Uche, he is been dubious. Some of his foot soldiers is one Kalu who said I will sign a MoU with him that will make him get 60% of whatever comes for Ohanaeze while I use remaining 40% to work. I said NO. And I remain focus in spite of them.’

‘Recently I gave a widow N250,000. The woman said she has never received anything from Ohanaeze. I want to win 90% of Ndigbos to make them realize that it is good to support the ruling party wherever you are. When I first met Governor Babajide Sanwo-olu, my spirit told me this is a man of God and one that will listen. He has done well. Our people should be more patient. The government has just passed one year. They move stage by stage’, Chief Ogbonna concluded. 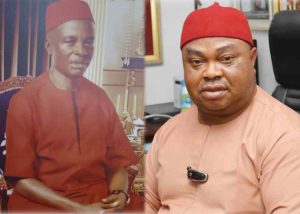 By: HighCelebritySquard   The Dubai Police Force, United Arab Emirates, has revealed how it arrested Nigerian Instagram celebrity, Ramon Abass, aka Hushpuppi. In a video released on its official Twitter handle on Thursday, the Middle-East police said a special team had been tracking the suspect and his gang’s activities on social media for about four months. The police revealed […]

The Epoch Dominating Strength Of Laredo Small Chops In Nigeria

By: HighCelebritySquard   …The inspiring story of one of Nigeria’s most successful small chops gurus …How he diversified into other sectors of the Nigerian economy Founded by creative and hardworking Olanrewaju Jimoh, Laredo Small Chops is a force to reckon with in Nigeria. The company has been able to storm and dominating the sector of […]

By: HighCelebritySquard   Members of the Lagos State House of Assembly on Thursday observed a one-minute silence in honour of a former governor of the state, Alhaji Lateef Jakande, who passed away in the early hours of the day. At a plenary session presided over by the Speaker, Rt. Hon. Mudashiru Obasa, the members also […]